The ACID Cannes 2022 programme organized by ACID (Association for the Distribution of Independent Cinema) will be held in Cannes from May 18th to May 27th, 2022, during the Cannes International Film Festival.

Deadlines for submissions, reception of viewing material as well as the dates for the ACID Cannes 2022 programme could be subject to change due to the current health crisis.

The film submission will close on Thursday March 17th 2022.

Submit your film now and take advantage of the Early Bird entry feeds until January 16th!

Films must fulfill the following requirements:

NB: Films that have been submitted to previous editions will not be reconsidered for ACID Cannes 2022, even under a new editing.

Entry fees are required for each feature film submission:

The payment is made through PayPal via the Festiciné platform. The preselection screening will be organized after the entry fees are paid. Entry fees are not refundable.

The ACID programme at the Cannes International Film Festival was created in 1993. Films are chosen by fifteen or so filmmakers, members of the association. It screens nine feature films, fiction and documentary, chosen among hundreds of works from all around the world.

ACID filmmakers follow their love for a film and wish to give visibility to directors whose work is scarcely distributed, in order to facilitate a theatrical release.

The screenings, open to professionals and also to the public are all followed by Q&As with the films' crews and ACID filmmakers who supported the films.

The films shown in Cannes are then accompanied by ACID and its filmmakers in the various stages of the theatrical release (search for distributors / promotion / programming / organization of the Q&A's / audience research). 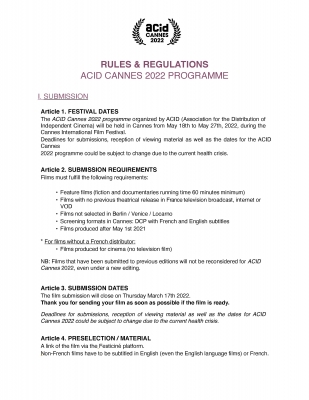